Madison Hart, an eighth grader at Merton Williams Middle School, is following in her late uncle’s footsteps. As president of the Merton Williams Student Council, she wanted to find a way for her school to give back. Her uncle, Scott Spino, a teacher and coach in the Rochester City Schools, was killed by a drunk driver in 2004 at the age of 28. “His whole goal was to make a legacy and give back to people who are struggling and don’t have much,” said Madison.

She and her fellow Student Council members brainstormed a lot of ideas for a charitable project that they could do together as a school. “Socks are one of the least donated items for the homeless and those in need, so that’s how we came up with the idea for ‘Socktober,’” said Madison. Students and staff donated nearly 500 pairs of new socks that are being sent to Rochester City Schools and area churches.

The Scott Spino Foundation, Inc. focuses on supporting programs that provide education, coaching and mentoring to children in the Rochester community. For more information, visit scottspinofoundation.org. 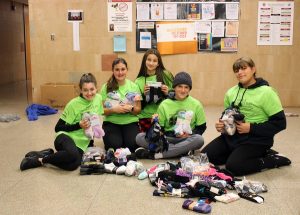